Celebrations have accompanied the birth of twin giant panda cubs at a zoo in France. The two females were born to the proud mother, Huan Huan from the Chengdu panda base, in the early hours on the morning of 2 Aug. The fanfare was immediate.

"FABULOUS! We are extremely happy to announce the birth of 2 lovely little pandas, born last night!" the ZooParc de Beauval in Saint-Aignan, central France, tweeted in French after the cubs came into the world around 1 am.

Rodolphe Delord, president of the zoo and son of the zoo's founder Francoise Delord, said: "The two babies are pink. They are perfectly healthy. They look big enough. They are magnificent."

The good news in France came hot on the heels of the China Conservation and Research Center for Giant Pandas announcing on 27 July that its giant panda Mei Qian gave birth to a record 249-gram newborn.

In France, the newborn cubs are Huan Huan and her partner Yuan Zi's second and third cubs after they produced the first giant panda, Yuan Meng, ever born in France on 4 Aug, 2017. That event caused a sensation in the country. (Photo by the Chengdu Research Base of Giant Panda Breeding)

Huan Huan and Yuan Zi arrived in France in January 2012 at the age of three on a 10-year loan agreement and have since become the biggest stars in the zoo, about 230 kilometers southwest of Paris.

Zoo officials were thrilled when Huan Huan, meaning "happy" in Chinese, and Yuan Zi managed to make "contact" eight times in a weekend in March. But veterinarians still conducted an artificial insemination to increase the likelihood of a pregnancy. 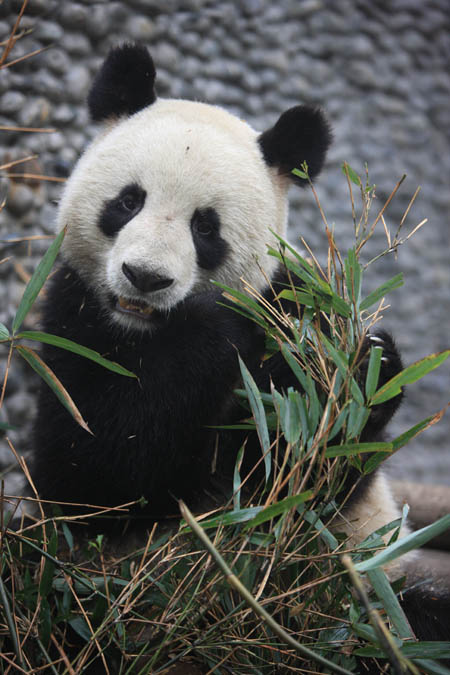 (Photo by the Chengdu Research Base of Giant Panda Breeding)

The artificial insemination was carried out by experts from the Berlin Leibniz Institute for Zoo and Wildlife Research when experts from Chengdu, China, had to stay home due to coronavirus-related travel restrictions. The experts from both sides were connected online.

Giant panda reproduction is extremely difficult because of the small window for conception. Female giant pandas are in heat only once a year for about 24 to 48 hours.

French first lady Brigitte Macron is spoken of as the godmother of Yuan Meng, which will turn four on Wednesday.

In Europe, also housing giant pandas are zoos in Austria, Belgium, Finland, Germany, the Netherlands, Spain and the United Kingdom.

(Modifications have been made to the source text.)